Don’t get me wrong–I have no man crush on the guy (certainly he’s no man’s man…have you seen his renn-fair hair???); however, I think he’s getting a bad rap.

The pure rage you’re likely to witness from other 40k players is amazing when you bring up the name, “Mat Ward.” You don’t need to go much further than Bell of Lost Souls to witness the hate for Mat Ward; it seems the vast majority of 40k players that LOVE tournaments really dislike Mat Ward. Lots of bad is said about the guy—and not all of it is limited to spew on the internet issuing forth from (sadly, very typical) man-child 40k players in nerd-rage mode.

All this vitriol for GW’s “supreme” codex-writer du-jour isn’t exclusive to just those who spend considerable effort arguing how all tournament scoring should be based solely on generalship (because, you understand, painting, fair play and good sportsmanship certainly have no place Warhammer 40,000, Warhammer Fantasy …or really any tournaments in the miniature-wargaming hobby); I’ve witnessed the full-on hate in person—in real life, by real people who weren’t hiding behind a safe, anonymous forum persona…though I can’t guarantee they weren’t just typical nerd-raging man-child 40k players. In the realm of 40k players, these guys are fairly well-adjusted guys, AND YET they’d be willing to perch on a rooftop with a gun for a shot at Mr. Ward, if they could.

Like I said, I certainly am not Mat Ward’s biggest fan, but is he as terrible as all the pissers and moaners say he is? I don’t think so.

I originally planned on tackling Mat Ward’s curriculum vitae to bring those who don’t bother keeping tabs on GW’s staff writers up to speed regarding the whole Mat-Ward controversy (due to them having lives). That started feeling like real work; and considering this post–which is simply just me voicing my opinion–has been delayed several times this week and last, I was scared that having to put “real” work into it would cause further, REAL, delays. So as far as his CV is concerned, suffice it to say that Mat Ward’s most recent codex forays are the Space Marines, Blood Angels and the Grey Knights….and he will never be able to wash away what he did with the Daemons Army book for Warhammer Fantasy Battles (and here’s a link to a rough CV for the guy, written with heavy bias…and rage).

With 8th Ed. Warhammer now out, I can forgive the Daemons Army Book. But I CANNOT forgive the Blood Angels Codex cover.

(Noteworthy as well: he co-wrote both the War of the Ring and Eighth Edition rules for Warhammer Fantasy Battles. An honourable mention should also be extended to Mr. Ward for his mad adjective-wielding skillz displayed in Codex Blood Angels. The Blood Angels have become the Space Marine chapter famous now not for their skilled artisans and the tragic gene-seed flaw which spurs in them the Red Thirst—no, they are now (in)famous and reviled for their overuse of the word “blood” as a standard prefix to the many words they use in their daily lives. “I say, Bloodbattle Brother old blood-chum, could you pass me the blood sugar? The sangui-percolator has just brewed up a fresh pot of blood coffee and I’d like to fill my chalice before we resume our Bloodstrike barrage!)

While I’m (hopefully clearly) not an ardent fan of his, I think my defense of Mat Ward is motivated and informed by two things: the comic-book industry and the old Canadian tee-vee show, SCTV.

I’m no expert on comic books—and less of an expert on how the industry works—but working at comic shops has made me realise one thing:  the crappy-ness of the writing in a comic book is not necessarily due to just the writer. Though there are plenty of hacks writing books these days, a bad editor (or poor editorial focus) can easily make an above-average writer come across as a hack. It’s the editorial policy determines, for the most part, the direction a book takes, and the writer just fleshes out what editorial policy has already decreed (a bit of a broad and generalised explanation, yes, but not too too far off the mark with this summary). 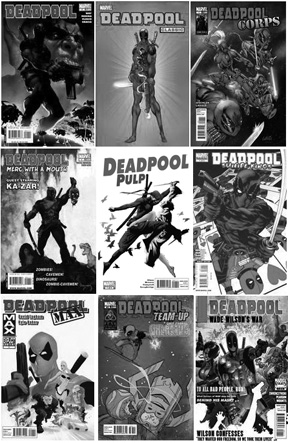 You think a writer is responsible for this many different Deadpool titles in the last 3 years? Uh-uh. That's all editorial and marketing staffs' doing!

I’m not going to go through and give an in-depth history of SCTV (that’s what Wikipedia is for); suffice it to say that SCTV was a show made by the Second City sketch comedy troupe beginning in the mid-seventies. It was the show that effectively launched the careers of Harold Ramis, Joe Flaherty, Eugene Levy, Andrea Martin, Catherine O’Hara, Martin Short, Rick Moranis and Dave Thomas. If you don’t know the names, you’d certainly recognize the faces (again, I won’t go too in depth on their careers—that’s what IMDB is for).

I had seen interviews with Joe Flaherty who talked about how even though SCTV started off strong, each successive season the fatigue of the actors (who also wrote the whole show) grew; and keeping the show fresh got increasingly hard for them to pull off. In their fifth year, with the departure of some of the original cast, Martin Short was brought on to SCTV.

Flaherty went on to say how totally energetic and imaginative Short was. He was not only a decent enough actor and funny enough guy; Short had boundless energy and ideas. Most importantly, Martin Short’s enthusiasm was infectious; it revitalised everyone’s acting and writing on the show, and they all performed better when he came on board.

Which brings me back to Mat Ward. I’m willing to believe that he’s the Martin Short of the GW studio right now: one look at the Grey Knights codex shows that there are a million ideas in the book. With the Grey Knight codex, you’re practically playing Rogue-Trader era Warhammer 40,000. This book could not have been written unless the author(s) had tons of ideas and boundless energy. Being that Ward is credited as the sole writer of the codex, I’m willing to believe all that creativity emanates from Matt Ward (as opposed to coming from up top and Ward is tasked with simply writing fluff and naming weapons).

Tho' I'm sure many might argue that Matt Ward is the Ed Grimley of Games Workshop.

Now, with all that praise aside, I also think that the GW studio has some sort of gaming “policy editor” akin to what comic books have. Taking the analogy further, I think Mat Ward more closely resembles the writer of an individual comic than he is the editor who is ultimately in charge. And I think GW has not put serious effort into cultivating good “editorial policy” in that comic-book analogy kind of way. I think they have their eye on some other goal (the cynic in me believes they’re focused on short-term monetary goals rather than the long-term health of their games’ universes); and provided Matt Ward doesn’t do anything too disastrous, they put a lot of trust in him, thus leaving him in control of editing and scrutinizing his own work–not a good or easy thing to do (how often are you able to shoot down your own ideas and convince yourself  they need to be reworked?).

I think Mat Ward needs a serious handler, someone keeping his ideas on a shortened leash ; my ‘Exhibit A’ to back that up is War of the Ring: the game so nice they used its rules twice (easily a third of War of the Ring’s rules were carried over into Warhammer Fantasy Battles’ Eighth Edition rules). While War of the Ring can be brought low by in-game abuse, Warhammer 8th (so far) seems to have dodged that bullet entirely. My theory is Matt Ward had less complete control in WFB8 than he did in WotR; he co-authored War of the Ring with Jeremy Vetock, but his work on Warhammer 8th Edition was co-authored not just by Vetock but by Jervis Johnson and a few more. Like every other writer, Matt Ward’s work excels with collaboration and input from others. (I truly think Mr. Ward’s ideas were more heavily scrutinized in Warhammer than they were in War of the Ring–likely due just from the amount of people working on writing the book.)

Or maybe I’m wrong about everything and Mat Ward is no better a games developer than the Black-Adder hairdo and Scarlet Pimpernell-esque goatee he sports in every photo you see of him.

But I don’t think so.

I think he’s one of GW’s best resources right now: a guy who is overflowing with ideas and enthusiasm. Still, when restricted to using only polite words, many express that his rules pave the way for abuse by less-than-scrupulous players; and the way GW’s games-development ideology tends to favour “funner” rules over tightly-written rules in their games, those people aren’t too wrong. The books Mr. Ward writes tend to be boundless in their enthusiasm. For Mat Ward to be truly effective, he needs someone (or a bunch of someones) to scrutinise his ideas, to push him further, challenge him, say ‘no’ to him and most importantly: reign him in. And I think Games Workshop is currently too fixed on short-term gains to do any of this (in any real way) for Mat Ward.

I leave this post fully expecting a lot of flack: just looking up his name for some information on his past works revealed just how many petulant. 40k. man-childs. despise this guy. I’m amazed at just how many 40k players think that Codex: Space Marines is one giant fan-fic codex glorifying Ward’s most favourite chapter: the Ultramarines (‘cause if GW were going to make a basic Marine codex, they wouldn’t include the Sons of Guilliman much at all; and AS IF Mat Ward is calling the shots on which heroes will be in the book and which chapters receive attention…and ultimately which models get made—that sounds more like a marketing department’s forté to me. Sigh.  /rant).

Closing on this, the biggest defense I can offer regarding why Mat Ward doesn’t suck: the Vanilla Marine codex is actually a solid book that really isn’t overpowered or underpowered, and the Blood Angels and Grey Knights codices are the final nails in the coffin of the old minimalist game-design outlook that spawned books like the Chaos Marines codex: Mat Ward is bringing us codices that are teaming with options and flavour–albeit with terribly uncreative names–to the point that Fifth Edition 40k is starting to feel like all the good parts of Second Edition 40k had going for it have come back to our game, namely flavour, personality and choice .

22 responses to “Why I Don’t HATE Matt Ward”

Tweets from the Front Line

Lord of the Rings 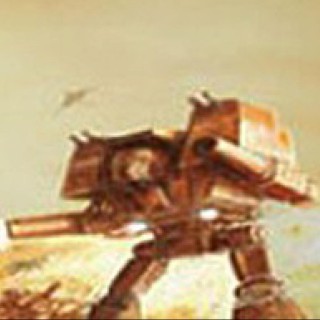